← back to
Sacred Bones Records
Get fresh music recommendations delivered to your inbox every Friday. 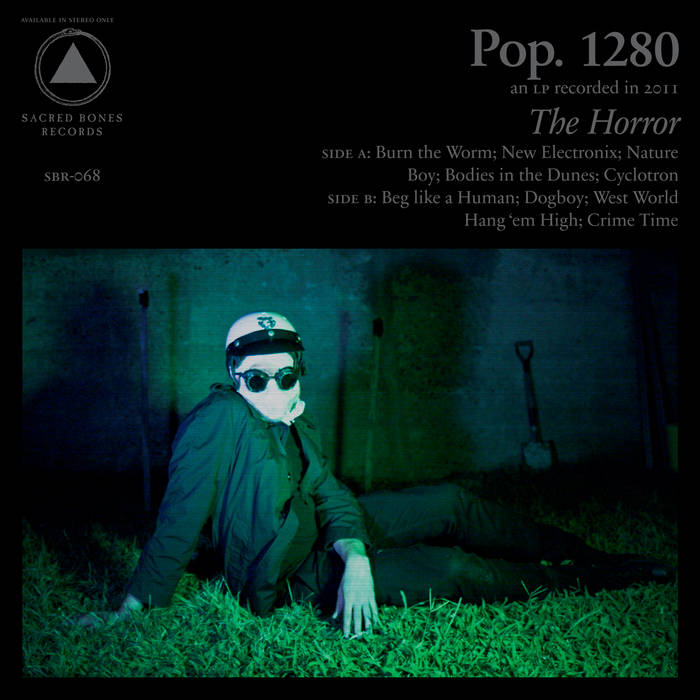 New York’s Pop. 1280 are back with their debut full-length for Sacred Bones, The Horror. This record comes almost one year after their highly-praised EP The Grid, and it finds the band exploring new territory and perversions. Chief songwriters Chris Bug and Ivan Lip are now joined by drummer Zach Ziemann (ex-Twin Stumps) and bassist/sonic manipulator Pascal Ludet. Recording for The Horror took place at the Python Patrol basement studios in Brooklyn with engineer Ben Greenberg (Z’s, Pygmy Shrews). The Horror showcases a lot more improvisation and in-studio writing, giving the album a darker, more unhinged organic feeling. This new approach let the band stretch out more, and while they haven’t lost the synth-punk skronk that has gotten them compared to Pussy Galore, D.A.F. and Cop Shoot Cop, The Horror adds longer songwriting explorations and psychedelic-scapes that reference bands like Cabaret Voltaire, Chrome, and early Sonic Youth. Thematically, The Horror finds Pop. 1280 stepping out of the cyberspace of The Grid and into the deserted beaches, highways and plains of a surreal hell. It’s the road album for the post-apocalypse.

In the year since their EP came out, Pop. 1280 have toured the East Coast and Midwest extensively with label-mates Cult of Youth, fellow pig-fuckers Pygmy Shrews, and Twin Stumps. They have been featured in Impose, Stereogum, and The Village Voice (twice) and got glowing reviews on Agit Reader, Vice, and Dusted. Additionally, Blind Prophet Records released a stunning new 7-inch in October 2010, and the band have been very active in their hometown of NYC, playing key shows throughout the fall and winter 0f 2011. 2012 though, is the year for these armageddoners. Get ready or die trying.

Pop. 1280 is an electronic punk band from the eastern coast of the United States.

Bandcamp Daily  your guide to the world of Bandcamp